The industry that has evolved the most and the only one that has really evolved is the communication industry; mobile devices, social media, internet and broadband. Communication has allowed a super connected world, accelerating social and economic changes with a speed unimaginable until recently. We are living the age of universal access. We are part of a global consciousness where information is immediate without technological or geographical barriers. Philip K Dick, Asimov or Stanislav Lem could not have expected a world where thousands of books were stored in an ethereal space called the cloud and accessible with a simple click where you want, when you want, what you want. Jules Verne did not imagined about communities formed by million people, centuries of culture in the palm of your hand, the whole story in great cinemascope through some simple glasses, a world where author and spectator merge, become confused and they are exchanged until it forms a single entity.

And in this transformational world, which rotates faster and spins differently, the paperboy continues pedaling downhill without brakes, straight into the abysm where things have no longer reason to be. The main Spanish newspapers have gone from an average of 200 thousand readers who paid one euro and a half each day to six million who do not pay a penny. It has gone from two hundred thousand readers and two thousand employees structure to six million readers and half of the workforce, from billing 500 million annually to strive to meet the 300 million. From leading politician’s paths to ask them help to survive. And the paperboy is precipitated downhill, faster and faster. 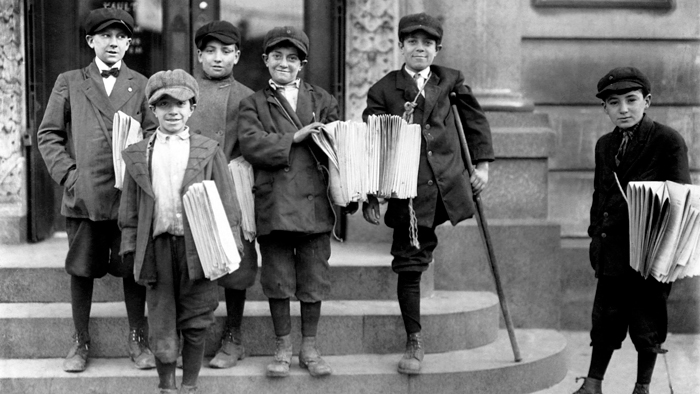 The main newspapers groups designed a lucrative business model based on three sources of income; content sale, advertising and promotions. But, even if the contents were the claim of the other two, this was the heading removed from the income statement, reducing the price and diminishing the value. When the promotional business was sold out and the crisis sank advertising investment to half, the contents were worthless. This is somewhat paradoxical as contents are consumed by millions of internet users and cost a lot to develop.

This cliff has been visible to the paperboy since long, and he was warned to have to turn to new horizons with more sustainable business models. The paperboy changed the bicycle for a 16 wheel truck and 20 tons long time ago. But the problem is maneuvering that thing is not an easy task.

The industry that has evolved the most and the only one that has really evolved is the communication industry, but evolution involves dramatic changes in the business model of the agents participating, in its structure and in the way they relate to their audience. Pay walls will rise and castles will fall, families will join and empires will merge. Blood will spill, there is already a lot of blood in the battlefield, too much, but there will be wealth because we talk about a market of 7000 million consumers, and the prize will be for those who are best able to manage uncertainty and monetize their content. Take advantage of something as precious as information.